Review of Christianity in Crisis: The 21st Century 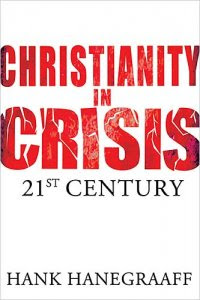 Christianity in Crisis: The 21st Century is a decent update to an earlier book by Hank Hanegraaff. Though some of it is repetitive, it does an adequate job, as it did when first written, of exposing the proponents of the “Health/Wealth” and “Word Faith” movements. The primary update aspect of the book is to include current proponents, such as Joyce Meyer, John Hagee and Joel Osteen who are popular authors not only among the Health/Wealth circles but mainstream Christianity, alongside the originators and early proponents of said movements. Taking their documented words, it compares what has been spoken and written to the word of God.

As a resource I would highly recommend this book to those questioning these abhorrent movements leading so many away from the truth, but I have to be honest and say that I was disappointed with the “update.” Though it contains a lot of new information it seems to have been thrown together hurriedly with a little rearranging attempting to give it a new feel. The older information is left primarily unchanged and can give the reader a sense that older information is current (having nothing to do with the validity of arguments). Also, the repetitive use of quotes from proponents leave a person wondering if such quotes are isolated incidents that may not truly represent the entirety of an individual’s teaching. Then again, this could be good in that it wets the appetite and leaves a hunger and thirst that can only be quenched through deeper study on behalf of the reader.

Posted by Pastor Brian B Van Dyke at 1:54 PM

Pastor Brian B Van Dyke
Kingman, AZ, United States
I'm a follower of Jesus Christ. At least that is what I strive to be. I'm an average person though. Even as a pastor I struggle just like everyone else. I know I am forgiven of my sins and yet I still struggle with the sinful nature. I am a husband. I wouldn't call myself a great husband, maybe an average husband. I'm trying to be a better husband. I'm a father. I love my children. I probably don't spend enough time with them, but I'm trying to be a good father. I'm a pastor. I felt called to be a pastor ever since I was a child. I have often joked that the reason God called me to be a pastor is because I would make a horrible Christian in any other capacity. I love my job and I love serving my God. I'm not as adequate in my job as I would like to be, but I hope God is making up for my weaknesses. I am a person. Just an average person. Just like you, but the difference between you and me might be that I know where I am going and you may not. I can tell you. Just ask.